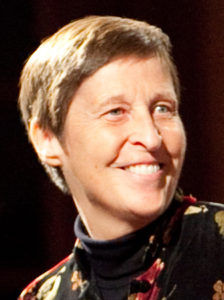 Widely performed throughout the country, the music of American composer Gwyneth Walker is beloved by performers and audiences alike for its energy, beauty, reverence, drama, and humor. Dr. Gwyneth Walker (b. 1947) is a graduate of Brown University and the Hartt School of Music. She holds B.A., M.M. and D.M.A. degrees in Music Composition. A former faculty member of the Oberlin College Conservatory, she resigned from academic employment in 1982 in order to pursue a career as a full-time composer. For nearly 30 years, she lived on a dairy farm in Braintree, Vermont. She now divides her time between her childhood hometown of New Canaan, Connecticut and the musical communities of Sarasota, Florida and Randolph, Vermont.

Gwyneth Walker has been a proud resident of Vermont for many years. She is the recipient of the Year 2000 “Lifetime Achievement Award” from the Vermont Arts Council as well as the 2008 “Athenaeum Award for Achievement in the Arts and Humanities” from the St. Johnsbury (VT) Athenaeum. In 2012, she was elected as a Fellow of the Vermont Academy of Arts and Sciences.