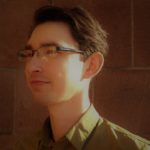 Jonathan Graybill garners his influences from nature, field recordings, history, and the legends and stories of the indigenous people of North America in his music. His music has been performed across the U.S. and Europe. Recently, his Nightscape for strings was recorded with the Brno Philharmonic Orchestra – this work was premièred by the Rochester Philharmonic Orchestra with subsequent performances by the Knox/Galesburg Symphony, Buffalo Philharmonic Orchestra, and the Butler Symphony Orchestra. Recent projects included a new work for the Kronos Quartet and a large scale wind ensemble work for the University of Maryland Wind Ensemble. Currently, Graybill is invested in an ongoing project, The Ancient Language of Birds, which consists of a series of works that pair a solo instrument with field recordings of the songs and calls of single avian species from North America – the pieces explore the hidden languages buried deep within these calls. The birds are connected with the myths and stories of Native Americans origin, exploring the cultural meanings and early names of these birds in each composition. More info at: www.JonathanGraybill.com