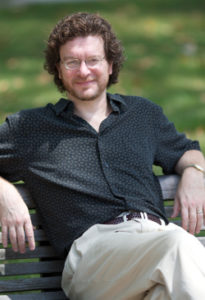 The music of Kile Smith is praised by critics and audiences for its emotional power, direct appeal, and strong voice. Gramophone hailed the “sparkling beauty” of his music, calling Vespers “spectacular.” The Philadelphia Inquirer called it “ecstatically beautiful,” American Record Guide, “a major new work,” Audiophile Audition, “easily one of the best releases of the year of any type… a crime to pass up,” and Fanfare, “a magnificent achievement.”

Recent commissions include Canticle, a concert-length work for Cincinnati’s Vocal Arts Ensemble, The Consolation of Apollo, The Waking Sun, Where Flames a Word, and May Day for The Crossing, Agnus Dei for the Mendelssohn Club of Philadelphia, the cello concerto And Seeing the Multitudes for Ovidiu Marinescu and the Helena Symphony, the song cycles In This Blue Room for Lyric Fest and Plain Truths for the Newburyport Chamber Music Festival, Red-tail and Hummingbird for Orchestra 2001 and Piffaro, The Red Book of Montserrat for the Philadelphia Sinfonia, and The Nobility of Women for Mélomanie. He’s also recently completed commissions for organist Alan Morrison, the Pennsylvania Girlchoir, the Association of Anglican Musicians, Cairn University, the Episcopal Cathedral of Boston, and others. He’s composed for Concertmaster David Kim and Principal Horn Jennifer Montone of the Philadelphia Orchestra.

Future commissions include a major work for The Crossing, as well as music for the Gaudete Brass, Susquehanna Symphony, Lyric Fest, Newburyport, the Church of the Holy Trinity, and others.

The Philadelphia Inquirer called the “immediately identifiable personality” of his music “breathtaking,” listing the premiere of Vespers as one of the “Top Ten” concerts of the year. The Buffalo News called it “altogether gorgeous and haunting,” and the Philadelphia City Paper raved that it is “almost preternaturally beautiful.” Audiophile Audition pronounced it “a masterpiece of the deepest kind… Seldom do I come across a piece with such profoundly direct emotional appeal.”

Other recent premieres are Two Laudate Psalms for Lyric Fest and the Pennsylvania Girlchoir, and Now ys the tyme of Crystymas by the Virginia Chorale. Ensemble Epomeo has performed his string quartet The Best of All Possible Worlds, string trios Thrice Blest and No, Not One, and the children’s piece The Bremen Town Musicians. The Gaines/French Duo (soprano saxophone, piano) commissioned This Broad Land and The Better Angels of Our Nature. Vespers and Where Flames a Word are available on the Navona label.

Many orchestras have performed Kile’s music, including the Delaware, Grand Rapids, Philadelphia Classical, and Jackson (Tenn.) symphonies, the Chamber Orchestra of Philadelphia, the Lehigh Valley Chamber Orchestra, and the Sofia, Soﬁa Youth, and Shumen State Philharmonics of Bulgaria. His works have been played by Network for New Music, Latin Fiesta, and the Ocean City Pops.

Among his awards are a grant from the Philadelphia Music Project, a Pennsylvania Council on the Arts Composer Fellowship, and grants from Meet The Composer and the Argosy Foundation. Temple University (2011) and Cairn University (2012) honored him as “Alumnus of the Year.”

Kile is Director of Content at Philadelphia’s WRTI-FM, when he isn’t hosting the new American music program Now Is the Time, co-hosting Discoveries from the Fleisher Collection, and classical hosting on-air. He is a Contributing Editor to the arts and culture magazine Broad Street Review, and writes for WRTI. For 18 years Kile was Curator of the Fleisher Collection of Orchestral Music, the world’s largest lending library of orchestral performance materials, at the Free Library of Philadelphia.