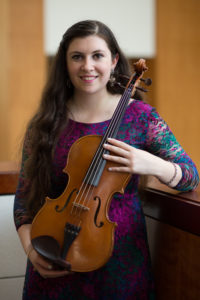 Megan DiGeorgio is a violist, composer, and educator based in the Washington, D.C. area. She holds a Bachelor of Music and a Master of Music from The Catholic University of America and University of Delaware, respectively, both in viola performance, with a music composition minor. Her music has been performed at Catholic University, the New Voices @ CUA Festival, at University of Delaware, and by The Euphonic Syndicate. Her music has also been heard at the Vermont College of Fine Arts, performed by ensemble-in-residence, loadbang. She received commission from The Euphonic Syndicate, who premiered her piece “The Wind Blows,” in Fort Collins, CO in 2017, and is currently working on a commission from Tsuna Sakamoto, violist of the National Symphony Orchestra. She has performed at the Kennedy Center for the Performing Arts, at several Smithsonian museums, at the Basilica of the National Shrine of the Immaculate Conception, and for Pope Francis during his 2015 American visit. She has been heard on the NAXOS American Classics record label, in a program of modern American orchestral music, with the National Orchestral Institute Philharmonic. She maintains an active private teaching studio at the International School of Music in Bethesda, Maryland of violin and viola students. In addition, she is a professional singer in the Schola Cantorum at the Cathedral of St. Matthew the Apostle in Washington, D.C. She freelances as a violist and composer in the greater Washington, D.C. area.