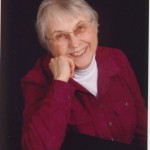 Carol Benck has been a member of the SSO since itʼs second season. Carol graduated from Township High School in Joliet, Illinois. She attended Joliet Junior College and Northwestern University. She also studied at Passavant Memorial Hospital in Chicago, Illinois. After college, Carol taught in schools of nursing until she had a family.
She became a mother, homemaker, and “professional volunteer.” Carol earned an AA degree in Fine Arts at Harford Community College in 2011.

How did you come to choose the string bass? In Joliet there were no grade school orchestras and only boys were allowed in band, so I took piano lessons. I signed up for orchestra as a piano player when I was a freshman in high school, but there were three other piano players. The four us were given the opportunity to learn string bass. I played bass through high school and junior college. I didn’t own a string bass, so I didn’t play after junior college until my daughter, Elise, who was a cello player in Sheldon Bair’s first middle school orchestra, told Mr. Bair that I used to play the bass. Before I knew it, there was a bass in my hands and the challenge to play it in the SSO.

Who was your most influential music teacher? I guess my piano teacher who kept taking me back because I quit every two years. By the time I left for college, I really enjoyed recitals because I could play the second piano part as an an accompaniment to her students playing concerti.

What was your most memorable SSO concert? I donʼt know. Maybe all of them.

What is your favorite piece of music that you have played by SSO? It is hard to decide. Iʼve done the 1812 Overture several times. The confetti ending was a nice touch.

What piece of music would you would most like to perform with the SSO? I donʼt know.

What other musical groups do you or have you performed with? I play alto and bass recorder with the Catherine Street Consort and I play bass with Copper Penny, a folk fiddle group.

What one piece of music you would like to have a recording of if stranded alone on a desert island? I would rather have a musical instrument!

What are your hobbies? Art, music, and anything to do with nature and reading.

Why do you play music? Music is something that causes the soul to sing. You can be down in the dumps, feeling blah or indifferent to the world, but coming together to make music with others focuses the mind and sends the endorphins soaring. It is something that can be enjoyed far into oneʼs golden years.

What else do you want others to know about you? I have enjoyed the opportunity to become acquainted with so much of the rich musical repertoire that Sheldon has led us through. The SSO has been a wonderful musical odyssey for me.