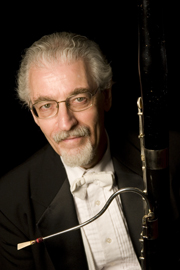 Phillip Kolker began his professional career at the age of 14 as Second Bassoon in the Albany Symphony, where he played until he graduated from high school. In the fall of 2010, he retired as Principal Bassoon of the Baltimore Symphony after 38 years. In between those first and last jobs, he served as Principal in the Milwaukee Symphony, Associate Principal in the Minnesota Orchestra and Principal in both the Sante Fe Opera and St. Paul Opera orchestras. Mr. Kolker has appeared as soloist with the Baltimore Symphony as well as with the Minnesota Orchestra, the Baltimore Chamber Orchestra, and, internationally, with orchestras in Spain and Taiwan. Conductors he has worked with include Stanislaw Skrowaczewski, Sergiu Commissiona, David Zinman, Yuri Temirkanov, Marin Alsop, Leon Fleisher, Eugene Ormandy, Leopold Stokowski, Pierre Monteux, Erich Leinsdorf, Antal Dorati, Howard Hansen, Frederick Fennell, Alexander Schneider and Jean Martinon. He has performed chamber music throughout the United States, Europe and Asia, appearing with such players as flutists Robert Willoughby and Marina Piccinini, oboist John Mack, English horn player Thomas Stacy, clarinetists Anthony Gigliotti, Franklin Cohen and Larry Coombs, pianist Malcolm Frager, violinist Hilary Hahn and cellist Anner Bylsma.

Mr. Kolker is a member of the Artist Faculty of the Peabody Conservatory where he serves as Chair of the Department of Orchestral Instruments. In summer, 2012, he hosted the second “Peabody Bassoon Week” (July 15-20) an intense camp for college and high school aged students which will feature repertoire of Telemann and Tango. Mr. Kolker has also been a visiting Professor at the Eastman School of Music, and has presented Master Classes at the Curtis Institute, Eastman, the National Orchestral Institute, the Glickman-Popkin Bassoon Camp, where he was Guest Faculty, the Interlochen National Music Camp and in Korea and Taiwan. He has been a featured recitalist at several International Double Reed Conventions. Upcoming engagements include a chamber concert of Latin American and Hispanic music in Frederick, MD on 10/28/12 and an American chamber music program on the Smithsonian Art Museum’s Steinway series, 11/11/12 at 3:00pm.