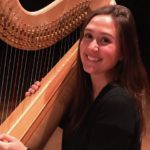 As a chamber musician Ms. Magill has performed the Debussy Harp, flute and Viola Trio with members of the Baltimore Symphony Orchestra at the Myerhoff Symphony Hall. In the fall of 2018, she performed the debut of Surround by Frederico Garica; a contemporary piece for six harps placed around the room. She frequently performs works for harp and choir with groups such as the Pittsburgh Camerata and Bach Choir.

Ms. Magill maintains a private studio of students of all ages. She believes that studying, appreciating and exploring music opens the mind and brings people together.