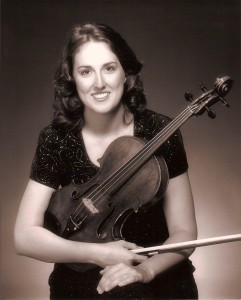 Sheridan Kamberger Currie is the principal violist of the Dayton Philharmonic Orchestra. She has performed as chamber musician throughout the United States, Canada, and Europe, and has performed as soloist with numerous orchestras since her concerto debut with the Susquehanna Symphony in 1997. In 1998, Currie was the Time Warner String Fellow at the Aspen Music Festival, and was the winner of the Nakamichi Viola Concerto Competition there. Other competition awards include first prize in the Geraldine B. Gee International Viola Competition. Currie has a passion for performing chamber music. From 2000 to 2005, she was a member of the Lake String Quartet, which performs nightly at their summer residency in Yellowstone National Park. The Lake Quartet released their first CD, entitled By the Lake, in 2005. As a founding member of the Masala String Quartet, she enjoyed working closely with such composers as John Corigliano, Bruce Adolphe, Gerhard Samuel, and Evan Chambers.

In addition to world premiere performances of works by Adolphe and Samuel, the Masala Quartet gave the European premiere of Chambers’ First String Quartet, and recorded twentieth century music on the Vienna Modern Masters label. As a chamber musician, Currie also performed for then-president and first lady, Bill and Hillary Clinton. Sheridan Currie began her musical training on the violin at age nine at William Paca Elemenary School in Harford County. After earning her Bachelor of Music degree at Peabody Conservatory under the tutelage of Baltimore Symphony principal violist Richard Field, she moved to Cincinnati where she studied extensively with Masao Kawasaki and Catharine Carroll at the University of Cincinnati’s College-Conservatory of Music. During that period, she earned a Masters degree and also served as teaching assistant for the Kawasaki/Carroll viola studio. Sheridan enjoys teaching viola and violin privately, and is currently an Adjunct Instructor at Cedarville University, where she teaches viola and coaches chamber music.