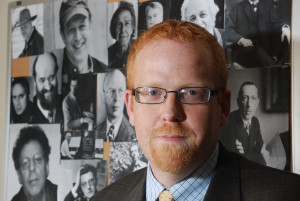 TODD GOODMAN has been described as “one of America’s promising young composers.” His work has been played by principal members of many major symphony orchestras, including the Chicago, Pittsburgh, Boston, Singapore, Florida, Iceland, and Seattle Symphonies. Goodman currently serves as the resident composer for the Lincoln Park Performing Arts Center (LPPACenter.org) located outside Pittsburgh, Pennsylvania. Prior to this appointment, Mr. Goodman served as resident composer for the Altoona Symphony Orchestra (2002-2006), the McKeesport Symphony Orchestra (2005-2006), and the Beaver Valley Philharmonic (2006-2007). As an advocate of arts education, Goodman also serves on the faculty of the Lincoln Park Performing Arts Charter School (lppacs.org), where he teaches musicianship and composition to some of Pennsylvania’s finest young musicians. As an educator, he was recently nominated for the 2014 Grammy Award for Music Education.

Mr. Goodman’s awards and grants are numerous, recently including his opera Night of the Living Dead [2013] being selected as one of the 2013 Center for Contemporary Opera’s New Works Showcase, the 2012 British Trombone Society Composition Award for his Trombone Concerto [2011], the 2012 North American Tuba Repertoire Initiative Commission for his Tuba Concerto [2012], and third place in the 2011 American Prize for Orchestral Composition for his Concerto for Bass Clarinet and Orchestra [2008]. Mr. Goodman has also received grants from the National Endowment for the Arts for his work with the Altoona Symphony Orchestra, the American Music Center for his Concerto for Bass Clarinet and Orchestra, as well as grants from the University of Colorado Entrepreneurship Center for his work, Symphony No. 1 “Fields of Crimson” [2003]. Mr. Goodman has also won such notable prizes as the International Project Piccolo Rebirth 2007 Prize for his work Echos: prelude and dance [2007] for piccolo and piano, two prestigious Gold Farbe Awards from the University of Colorado film department for his scores to two short films Hypnotic Reverie and Light Autumn by writer/director Ryan McVeigh, and four ASCAPlus Awards.

Todd Goodman was born in Bedford, Pennsylvania, in 1977. He received his Bachelor of Music degree in composition at the University of Colorado at Boulder and his Masters of Music degree in composition at Duquesne University in Pittsburgh. Pennsylvania, and a Ph.D. ABD in theory and composition from Kent State University, He has also studied at the Ecole Normale de Musique in Paris, France, with the European American Musical Alliance and at the Aspen Music Festival in Aspen, Colorado. His principal composition teachers have been Pulitzer Prize winning composer George Tsontakis as well as David Stock, Frank Wiley, and Richard Toensing.

Todd Goodman’s available recordings include the February 2010, release of River of Sorrows on the Duquesne University Press CD Winds of Summer with the Duquesne University Wind Ensemble conducted by Robert Cameron. The world premiere of his Symphony No. 1 “Fields of Crimson” recorded by the Altoona Symphony Orchestra conducted by Maestro Nicholas Palmer, was released through Wrong Note Media, Inc. in July 2003, marking the 140th anniversary of the subject of this work, the battle of Gettysburg. New releases scheduled for 2012-13 include the University of South Florida recording of his woodwind concerti, including his Bass Clarinet, Alto Saxophone, and Piccolo Concerti. Being released on the Centaur Label, piccoloist Jon Robert Craft is including Goodman’s Echos: prelude and dance on his new album of new works for the piccolo. Recordings of Todd Goodman’s Tuba Concerto are being planned by Grammy-nominated Tubist, Aaron Tindall, as well as recordings of his Trombone Concerto by British Trombone Society president, Brett Baker.

Mr. Goodman’s current commissions include a grand opera with librettist Stephen Catanzarite, based on the classic George Romero film Night of the Living Dead for Pittsburgh-based Microscopic Opera.

Mr. Goodman now resides in Midland, Pennsylvania, with his wife, Katie, sons Emmerson and Foster, and their St. Bernard “Thelonious.”