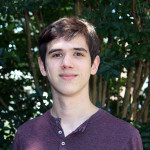 Zach Beever is an only child and lives with his parents in rural Harford County. A recent graduate of Harford Community College, he will be pursuing his undergraduate degree in composition at Boston Conservatory this Fall, with his eye toward a doctorate in order to teach and compose. Both music composition and piano performance interest him greatly and will no doubt be part of a lifelong passion, one that began with his first piano lessons at 14. Originally drawn to soundtracks, Zach discovered the world of classical music under the tutelage of Dr. Neil Anderson-Himmelspach (composition) and Dr. Joseph Satava (piano) at Harford Community College. He wrote, performed, and learned over his two years there, with his compositions growing from improvisations to planned pieces. Mr. Beever is incredibly grateful to these two teachers and for his time at Harford, an experience which undoubtedly deepened his understanding of music. Don’t Panic (originally for two people at one piano) was written over the course of a few weeks in the Spring of 2012. The piece premiered during Harford’s Fall 2012 chamber recital with Mr. Beever and a fellow student, Zak Cover, at the keyboard. Afterward, Sheldon Bair offered to perform the piece with the SSO if Mr. Beever rewrote it for orchestra. Accepting the challenge, Zach rewrote his composition over a six-month period. It was then that he titled it Don’t Panic, being inspired by the “large, friendly letters” printed on the guidebook in “The Hitchhiker’s Guide to the Galaxy.” Like the book series, this piece is not a serious journey and should be taken with a bit of humor about “life, the Universe, and everything.”