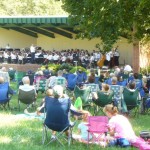 After almost a week of rain, the cloudless sky over Bel Air was reminiscent of that fateful Tuesday ten years ago as Harford County residents gathered to remember and commemorate the tenth anniversary of 9/11. The short remembrance ceremony, hosted by radio personality Jonathan Palevsky from WBJC 91.5 FM, melded together compositions by Patrick Burns and local composer Benny Russell written specifically for the events of 9/11 with inspirational words by representatives of major faith groups and the acapella arrangements of traditional works by the Deer Creek Chorale under the direction of Mary Banghart. 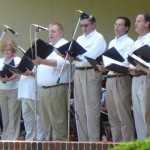 The ceremony opened with Fanfare For The Common Man under the baton of Brian Folus and the Star Spangled Banner under the direction of Maestro Bair. The SSO performed the Burns and Russell compositions and provided instrumental accompaniment to the Deer Creek Chorale in a stirring closing performance of God Bless America.

As is the custom of the orchestra, the very first music played by the SSO in the season is the National Anthem. This year was no different. With both the audience and the orchestra standing, honors were rendered to the nation and the 35th season was officially underway. With only a slight pause after the Star Spangled Banner, Maestro Bair called for the opening notes of Franz Shubert’s spirited overture Alfonso und Estrella. Following Schubert’s work, the orchestra reconfigured for Haydn’s Symphony #35 in B-flat Major. This melodic work in four movements was also warmly received by the audience.

When Maestro Bair jokes with the audience for the concluding work of the first half of the concert; he had always been “A sucker for a good waltz” and that Richard Strauss had written some of the best. However, Strauss’s waltzes are not easy to play. At dress rehearsal, the musicians were urged to get into a “Viennese mood” by thinking of “whipped cream and coffee”. What the audience didn’t hear was the Maestro’s stage whispered instructions to the orchestra of “Give them plenty of whipped cream and coffee” as he summoned up the opening bars of Der Rosenkavalier. The exhortations apparently worked: the waltz was performed quite well to the delight of the audience.

Opening the second half of the concert was Copeland’s Fanfare for the Common Man under the baton of Brian Folus. This very popular brass and percussion piece is always a crowd pleaser and it certainly worked its magic on the audience once again.

The highlight of the evening was Tchaikovsky’s March Slav. This ever popular work progressed from melody to melody, moved slowly and then with determination, and culminated in a thunderous finale which evoked vigorous applause from the audience.

The concluding work of the concert was three selections from Stravinsky’s Firebird Suite. The Ronde des princesses flowed seamlessly into the Berceuse, which then charged into the Finale. After the work was completed and as Maestro Bair recognized the contributions of the soloists, the audience also recognized the contributions of the orchestra with a standing ovation.

The SSO kicked off the Holidays with its annual Christmas and Holiday concert entitled Holiday Melodies and Peanuts. Opening the show was local composer and music icon Theldon Myers work Music for a Special Season. Myer’s holiday mood setting work was followed by the introduction of guest pianist Joseph Satava and the performance of William Grant Still’s Christmas in the Western World. As the larger than usual audience applauded, the orchestra prepared for the final piece of the first half, Ellen Taaffe Zwiilich’s five movement work Peanuts Gallery. This wonderful work, again featuring pianist Joseph Satava, described Schroeder , Linus, Charlie Brown, Lucy, Snoopy, and Marcy and Peppermint Patty through music: Schroeder echoing strains of Beethoven, a lullaby for Linus, a lament for Charlie Brown, Snoopy doing the samba, Lucy freaking out and Marcy and Peppermint Patty leading a parade.

After rousing applause from the audience, the orchestra took a short break before conducting a live auction to raise funds for SSO operations. Many thanks to Harford County Councilman Capt’n Jim McMahan are in order for serving as the auctioneer, as well as thanks to SSO violist Noreen Hiltz for her hilarious support of Capt’n Jim.

The orchestra followed the auction with Jessel’s Parade of the Wooden Soldiers—arranged by SSO member Don Raff—which delighted the audience with its bouncy melody and theatrics. Jessel’s work was followed by Sir Malcolm Arnold’s The Holly and The Ivy and then the world premiere of Jesse Ayer’s Fire of the Living God. Ayer’s work saw the SSO horn section move out into the audience space for the performance. Ayer’s work was a major change up from traditional holiday fare and the almost other worldly rhythms and tones- complete with Harford County music students playing whirlies—had the desired effect on the audience: a standing ovation in the middle of the concert!

The concert concluded with Maestro Bair’s arrangement of sing-along classics (BTW, the singing was great again this year) as well as a visit from Santa and his elves while the SSO played Anderson’s Sleigh Ride. This year again, Maestro Bair put the SSO on autopilot as he jumped on the drums to add some additional rhythm to Sleigh Ride. Not to be outdone by last year, principle percussionist Mary Eilerman enlisted the aid of SSO member and percussionist Alan Andreycak as they dueled for the best whip snap at the end of piece.

Guest Conductor Ronald Royer opened the evening’s performance with Mussorgsky’s Night on Bald Mountain, evoking both concerts themes of ghosts and witches and guests from Canada. Maestro Royer, a musician, composer, and currently Music Director of the Scarborough Philharmonic in Ontario, Canada, adeptly led the SSO through the musical witches, various spooks of all sorts and finally the tranquil resolution of a sunrise through the tonal poem—all to the delight of the audience.

Royer followed the applause with a composition he wrote entitled Echoes: A Concerto for Clarinet and Orchestra. The guest soloist, Kaye Royer, in whose name the piece was written, did the musical heavy lifting, as she gracefully displayed her clarinet virtuosity throughout this light and melodic work. While the piece was centered on the idea of echoes, the astute listener could hear snippets and ideas from the scores of many well-known movies, reflecting the composer’s extensive experience as a professional musician in the movie industry.

The second half of the concert opened with Beethoven’s Cavatina from String Quartet Op. 130, scored for string orchestra. This string piece, which Beethoven himself considered to be his greatest achievement, was sent to the heavens on Voyager 1 and 2’s golden disk. As the SSO performed this emotive work the hall was enthralled by the anguish Beethoven imparted to this Preghiera, and as the last notes died, responded approvingly.

Maestro Bair followed the Beethoven work with the Noon Witch, Op 108, by Dvorak. This later work by Dvorak tells a most gruesome tail of a household visit by the Noon Witch. Maestro Bair let the SSO quite expertly through the work as the various instruments evoked a typical household, squalling child, creeping witch, and returning father. While the story ends on a sad note, the music ends quite dramatically. The audience responded with hearty applause.

To conclude the concert, Maestro Bair led the SSO though Wagner’s Die Meistersinger. Wagner has so much going on in the music; melodies, runs, echoes, and plenty of cymbal crashes. (In fact, Principle Percussionist, Mary Eilerman, hit the cymbals together so hard that one literally inverted) that there was something in the music for everyone. At the conclusion, the audience was on its feet with applause, but as that died away, the audience was treated to an encore of the timeless Danny Boy in commemoration of St. Patrick’s Day.

An eclectic mix of traditional chamber music, Debussy, Mozart, Mendelssohn, etc as well as new music by Jay Ungar, Beth Bultman, and Tim Reinhardt. Ensembles included the The DiCarlo Strings, Cello-rama, Brass Fripperies, and the SSO’s own steel drum corps “Steel Pandemic”. Nearly $1700 was collected to benefit the Judi Famous Music Fund. The fund has provided over $10,000 in music scholarships to Harford County students since 2006.

Grateful for the Grateful Dead. Breaking with tradition, the SSO dressed in psychedelic garb for Lee Johnson’s orchestration of nine songs by the ever popular Grateful Dead. And what a concert it was. The work was introduced by the string principles playing in a solitary quartet while the remainder of the orchestra ambled on to the stage until the full orchestra was assembled. With the completion of the quartet movement, Concert Master Wendy Bohdel led the orchestra into faliculi faliculi, the opening tune used by The Dead to warm up. At that point Music Director and Conductor Sheldon Bair made his appearance and took over the conducting reins as he walked and sometimes ran the orchestra through 6 other arrangements by Lee Johnson of the Dead’s best known works. The visual effect of “hippie” dress and the wonderful arrangements by Lee Johnson enthralled the audience for the entire first half of the concert. Ending the “Dead” concert, the orchestra reprised Funiculi Funicula to a standing ovation by the audience and the applause of the composer, Lee Johnson. 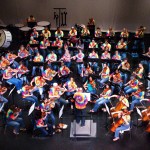 Directly after intermission, a chamber orchestra configuration of the SSO accompanied soloist and Harford County resident Emma Zyriek in two Arias from Mozart’s Don Giovanni. Emma’s performance and stage presence was absolutely stunning in her portrayal of DonnaAnna, described by Mozart himself as a “saucy girl”. Upon completion of the works, she was greeted with rousing applause and a bouquet of tie-dyed roses. 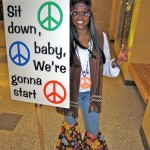 As the orchestra reconfigured to its full size, Maestro Bair took a moment to recognize the departure of long term member Anthony Belcastro. “Tony” played with the orchestra for over twenty years, and served as President of the Board of Directors for 12. Tony made his way back to his seat with the violin section to the applause of the audience and the orchestra. As Tchaikovsky was a great fan of Mozart’s work, Maestro Bair then led the orchestra in Tchaikovsky’s “Mozartina”, which was immediately followed by the 1812 Overture. As is the custom of the orchestra, the church bells were “played” by hammering on tank wrenches graciously provided by Aberdeen Proving Ground. 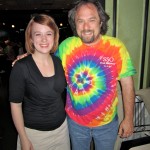 While somewhat of an unorthodox instrument, the tank wrenches are virtually indistinguishable when sounding (and a lot easier to move) than real church bells. Cannons fired, bells rung, musicians played feverishly, and streamers flew much to the delight of the audience, concluding the SSO’s 35th season.